Events are stored in a simple text file. Each line in the text file lists one event which may be displayed. Here is an example showing a couple of events:

So a simple event is defined by the day, then the month (3 letters), the year and the event. The year is optional, and if defined then the number of years is displayed with the event. (e.g., John will be 29 on his birthday in 2009, so the number “29” is displayed in parenthesis after the event.) 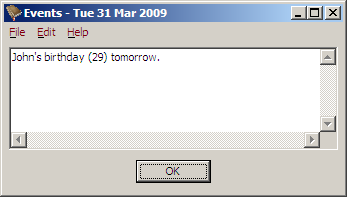 By default, events are displayed from five days before they occur. You can change this for a specific event by specifying the number of days warning after the year. For example, if you had “1 Apr 1980 10 John's birthday” then on the 25th of March you would see: 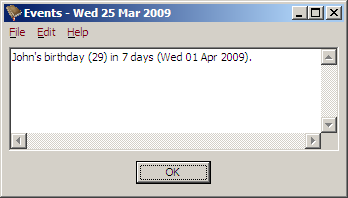 If you want to use a default lead time other than five days, you can change it by putting the following in the event file:

Where “n” is the number of days lead time you want by default. All events specified after this line will have the new lead time by default.

A Note About February 29th

A Day of the Week

If you want an event on, say the first Sunday of a month, then you can specify an event like this:

You specify the day of the week, the month, the year if you want it, and the event.

If you wanted an event on the second Sunday of the month instead, you would specify it like so:

Again, you specify the day of the week, but this time you include a plus two to indicate you wanted the second Sunday, not the first. It is important that there be no spaces around the plus sign. (Note that “Sun” and “Sun+1” are equivalent.)

If instead, you wanted an event on the last Friday of the month, you could specify it like so:

So a negative number indicates the last of the specified day in the month. Likewise the second last Friday would be “Fri-2”.

Note that we also specified a range of months for this event, so the event will occur on the last Friday within the specified range (every month in this case). See Advanced Event Formats for more details on advanced event formats.

There are two event files available for editing:

You can edit these files from the Edit menu. 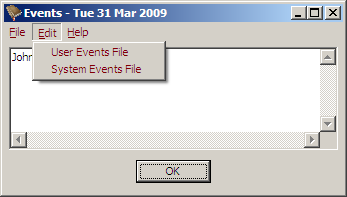 See Events File Locations for the locations in the file system where these files are stored.

‹ BDay
Running BDay on Start Up/Log In ›
up